“I’d like to know if having 2 children so close together, and then having one of them needing so much of your time, left you feeling that you were “short-changing” Rory, and how did he handle all the “special attention” that HE wasn’t getting?”

That’s a good question.  I can’t promise that I will turn every comment into a separate blog post, but I would like to give this one a full and complete answer.  Thanks Mary.

Yes, we were aware that Rory felt left out, BUT (a) the majority of Ian’s therapy programme took place while Rory was at kindergarten, so he wasn’t home for most of it, and (b) knowing he felt left out made us careful to include him when he was home.  We just had to be careful not to talk too much about therapy ‘after hours’ as it were, when Rory was around.  We were very focused on the therapy programme and it really dominated our conversation.  Neil and I just made sure that when Rory was there, HE became the centre of attention.  When therapy was over for the day, Ian got ‘time out’ to do his own thing (under supervision, of course), but Rory and I would be together during those times, or Neil would read to him or draw with him.  We really made an effort to keep an even keel between the boys. 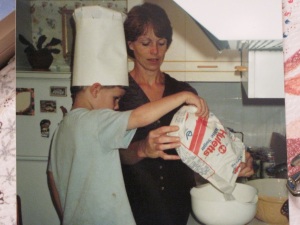 (Photo of Rory baking, wearing a paper chef’s hat he insisted I help him make.)

I’m not sure if having them so close together made any difference – in fact, it might have been worse if there had been a bigger age gap between them and Rory had understood more of what was going on.

When he was a little older, Rory got more involved in what Ian was learning, and loved to show his superiority by being able to do so much more than Ian.  (Naturally, he was encouraged not to lord it over his brother too much!)  He even made little ‘work books’ for Ian to complete.  These were sometimes way over Ian’s head, but it was lovely that Rory did it for him, and as Ian progressed, he could answer more and more of Rory’s ‘work book’ questions.  It helped Rory to feel more involved in Ian’s life and a part of Ian’s on-going education.

I’m sure that despite our best efforts there was always an imbalance, but as parents, we did what we could.  And besides, Rory was my firstborn.  Ian may have been ‘special’, but Rory was – and still is – a special person in his own right.  A great kid who – once we’d got past the early years – made it easy to want to be around him.