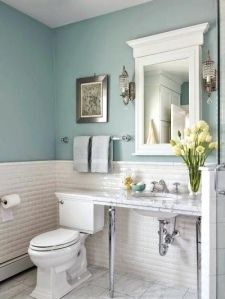 Ian spends his days at a fabulous place, with wonderful people, who always and only have his best interests at heart, and who go out of their way to keep him entertained and happy.

But when Ian wouldn’t use the bathroom there, they were concerned. He would have a wee at home before he left, and would go as soon as he got home, but for the whole day at the center, he would hold his urine.

This worried them. And I’m sure, rightly so. His bladder and kidneys are being well exercised, but I doubt it can last forever.

Admittedly, there’s family form here …. My mother once called me ‘a camel’ because I didn’t need to go to the bathroom as often as she thought I should. But Ian’s lack of bathroom visits had become an issue, and I would have to come up with a plan to deal with it.

Ian wouldn’t even go into the boys’ bathroom at the center. Wouldn’t cross the threshold. Now, I’m not going to cast aspersions and ask “What the hell happened in there to make him so resistant?”; I try not to make those kinds of waves. I just applied some common sense: will he go into the girls’ bathroom instead?

Yes, he would. Problem number 1 solved.

As soon as Ian knew why he was being guided there, he would put on the brakes and refuse to cooperate. Mum was called. Could I put in an appearance and help them?

Not for your peace of mind; for him.

Ian responds differently to different people. He will do some things for one person, but won’t do them for others. Which is a big problem when he has a different supervisor week by week, and I’m the only one who can see the issue…

Problem number 3 has not yet been resolved.

Everything seemed to be going ok. My presence was enough to ensure that Ian did what staff required him to do.

I would hide in a room, listen to his supervisor try to persuade him into the bathroom, and appear – magically – when he put up too much of a fight. “Do as you’re asked, Ian.” I’d say. “Please listen to staff.”

The joke was that Ian began to seek me out! The staff suggested Ian might look to me for ‘reassurance’. They’re so kind.

I strongly suspected he looked for me to see if he really had to do as he was told.

Either way, I was rumbled.

But some tenuous progress was being made.

I was called to assist. Ian was being difficult.

Actually, Ian was in full bullish resistance, with his heels dug into the carpet, and a set expression on his face.

I managed to manoeuvre him into the bathroom, but would he go into the stall? Not a bit of it!

But I was there with his carer, and all I wanted was for him to do as I ask.

He got a bit physical, pushed me back against the stall door.

And here, writ large, was the difference in approach.

His carer gasped and said “Fiona, be careful!”

My ire was roused. I could feel the energy, like white light rising from the depths of me. I got in his face.

Well, my parenting style is my own, and it has served well enough thus far, and sure, Ian has rights, but I’m not sure the right to NOT pee is actually included in there, and besides, no matter your age, special needs or not, you should listen to your mum.

I asked his supervisor to leave, and after a few awkward moments, he did as I asked, and sat on the toilet. He didn’t wee, but for us the battle was over.

There was a brief hug … a sigh … and a long journey home.

Of course, we’re now back to square one, and the entire bathroom acceptance process has to begin again.

There will be a meeting, and decisions will be made. And I shall have to take the bull by the horns and speak up, which will mean possibly hurting someone’s feelings; at the very least, denting their self esteem; and specifying that only one favoured member of staff be involved in the bathroom business.

Because Problem number 3 definitely has to be addressed.

Addendum… at a later date —

…. and then the person Ian responded to best left that centre, and someone else took their place. But this someone listened to me. Actually listened to me. Maybe you know how rare that is. Maybe you don’t. Either way, I felt as though I’d met an angel.

This man came to our home at the time Ian was due to get back from the centre, and quietly and unobtrusively watched and listened to how I dealt with Ian.

He was stunned by how little it took.

This wonderful man took what he had learned, and one day, when they were on an outing and would only get back to the centre later than the usual end to the day, he took Ian to a restroom, and lo and behold, Ian did what needed to be done.

Not long after that, this angel of a man left the centre too, and now we’re back to square one.